History of Horseback Riding in Utah

Native Americans in Utah began to acquire horses in the late 17th century as wild horses, escaped from the Spaniards, began to multiply and spread throughout the West. The Indians also traded horses among each other as they were an enormous asset for hunting, transportation and warfare. On horseback a warrior could run faster than the buffalo making hunting them far easier. Just as important, the horse could carry or pull by travois much heavier loads at greater speed. Since most of the Indians depended on a nomadic life style following the seasons and the buffalo herds it became possible carry much more with them and to move farther and faster. Thus the power of the horse transformed their lives and vastly improved their standard of living.

Utah was the last part of the Southwest to be explored by Europeans. On the eastern side of the state the Colorado River with Glenn Canyon and the Grand Canyon made almost impassable barriers while to the west the Mojave Desert presented a waterless wasteland which was very difficult for men on horseback to cross. The Spanish explorer, Coronado, may have touched in Utah on his 16th century expedition, but the first recorded visit bringing back really useful information was the Escalante Expedition led by two priests trying to find a route from Santa Fe to Los Angeles. They met many adversities and did not manage to reach California, but they did travel through a large part of Utah by crossing the Colorado River above the steep canyons and coming back through the Arizona strip to cross the Colorado near present day Page in Arizona. 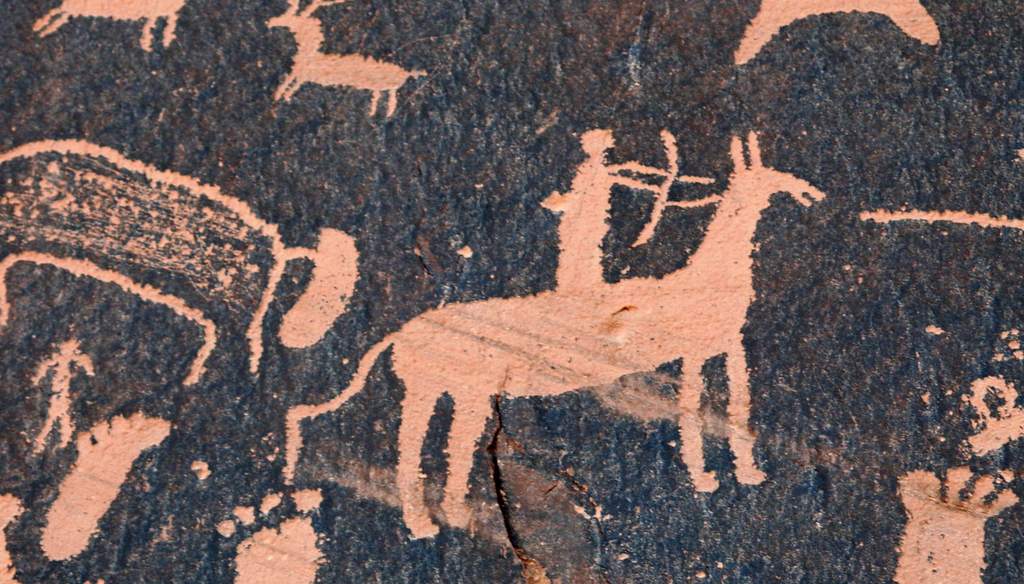 “These petroglyphs showing mounted Indians from Arches National Park probably date back to the early 1700s.”

What really opened up Utah to American riders was the rediscovery of South Pass through the Continental Divide which became the great route for settlers headed for the West Coast and Utah. It is estimated that about a half a million people followed this route by wagon train through South Pass before 1869 when the transcontinental railway was completed. The South Pass route was discovered by Robert Stuart in 1812 when returning from a fur trading expedition in Oregon.  He left detailed records, but it was not used until 1824 when Jedediah Smith rediscovered it.  At that time the fur trade drove the economy of the area for Europeans and the famous Mountain Man Rendezvous were organized between 1825 and 1840 so that the trappers could sell their furs and trade for whatever supplies they needed. The first one in Utah was held at Cache Creek in 1826 and was supplied by long lines of pack horses loaded with trade goods coming across the Continental Divide. These colorful rendezvous brought people from hundreds of miles around. Four of these picturesque rendezvous were held in Utah.

The Old Spanish Trail running from Santa Fe to Los Angeles was about 1,200 arduous miles long and provided the only overland route connecting the two former Spanish colonies of New Mexico and California which had become Mexican in 1821 after the Spanish defeat by Mexican revolutionaries. The first part followed Escalante’s outbound route through Arizona and Utah.  A lucrative trade developed carrying woven goods like serapes and blankets to California in exchange for things like horses and slaves. Apparently many wild horses were easily available in California at that time. The traffic began in the 1830’s and continued until the 1850’s.

The famous Mormon Trail which led to the settlement of Utah followed the same route as the Oregon Trail through South Pass, but diverged farther on to head toward Salt Lake instead of continuing farther west. The Mormons had been persecuted in their original homes in the Mid West on account of their unorthodox religious beliefs and their leader, Joseph Smith, had been killed. They therefore sought an unpopulated area where they could avoid persecution and Utah filled the bill as no one else had yet settled there.  In 1847 when they first arrived, this territory was not even officially part of the United States though Mexico ceded it to us the following year after their defeat in the Mexican/American War. The Mormons continued to travel to Utah by this trail for another 20 years with almost incredible determination facing horrendous privations and hardships. When they had not the means to buy wagons, horses and oxen they used hand carts and sometimes perished along the way when they failed to cross the mountains of Wyoming before the snow came.

In the early days horses were vital to the settlement of Utah. The main use for horses these days is recreational and our horseback riding vacations in Utah certainly take advantate of some of the most spectacular scenery in the world. One can visit many beautiful parts of the state which cannot be reached in any other way except by hiking and riders can leave the beaten tourist path far behind. Horseback riding is still vital for remote ranches as well and authentic cattle drives from summer to winter pasture still take place. Adventurous guests can participate in these drives to get a taste for what a cowboy’s life is really like and experience the excitement of the Old West.