Choose from 7 trips in Kenya

Mel and Bayard Fox, founders of Equitours, began riding in the Masai Mara in 1979, taking summer guests from their Wyoming ranch. In the early years they guided the trips themselves and have been back many times. Mel was raised in East Africa, speaks fluent Swahili and is very familiar with the flora and fauna.

Kenya was the first Equitours ride overseas and remains a great favorite. Our horseback riding safaris in Kenya are without a doubt the most exciting and adventuresome of all our rides. Strong riders, confident at all paces on broken terrain while riding athletic horses will be in their element here. The opportunity to see big game and interact with wild animals on splendid horses is thrilling. Sometimes in the Masai Mara huge herds of wildebeest and zebra extend as far as the eye can see. The opportunity to see native tribesmen whose culture is dramatically different from ours in remote areas unspoiled by frequent tourist visits never fails to fascinate.

The mobile camps on all these safaris are surprisingly comfortable. The two person tents are spacious and the beds have sheets and blankets. The fresh food is well prepared and the service is excellent. Hot showers are available every evening.

One of the unforgettable memories of an African horse safari is the concert of night noises which accompany your dreams.  Often you can hear the plaintiff, lilting calls of a hunting pack of hyena in the distance and sometimes the deep, vibrating roar of a lion.  Most galvanizing of all is the sudden shriek of a harmless hyrax in a tree above your head.  There is always the murmuring, indistinguishable background noise of myriads of birds, animals and insects which lulls one to sleep.

Kenya is equatorial, so there are not dramatic seasonal fluctuations. March is generally the hottest month.  There are two rainy seasons: November to mid-December and April to May. You may encounter unseasonal rains at other times, but these usually take the form of evening showers. Since the safari route is at elevations between six and eight thousand feet, the nights and early mornings are quite chilly and you will need a sweater and a jacket. The days are warm to hot, around 80 degrees, but there is usually a breeze.

When is the best time to witness the migration in Kenya?

The Mara-Serengeti ecosystem is unique for many reasons. It supports the last great wild herds of large herbivores left on the planet. Figures and estimates vary but there are well over 1 million wildebeest and maybe 300,000 zebra that migrate in two distinct areas and 200,000 other large herbivores add to the variety. Cape buffalo, giraffe, eland, topi, hartebeest, impala, waterbuck, warthog, and two types of gazelle are very prevalent in the Mara and migrate much less if not completely sedentary, especially in the Mara ecosystem. When you add the elephant and hippo as the largest herbivores plus the extraordinary list of predators who feed on them all, you have an awesome wildlife spectacle.

The two migrations are distinct in that the smaller one called the Loita migration stays in Kenya and our Masai Mara’s riding route follows its whole range. It may be encountered on any month of the year. The greater migration, which is better known, does a large clockwise circle, which is constantly on the move.

The north of the Mara has a higher rainfall than most of the Serengeti, which therefore supports more bush, and a greater density of permanent herbivores. The big Serengeti herds come to Kenya in approximately June/July and move back and forth before finally departing back to Tanzania in late October. They are famous for their sheer numbers and of course their crossing and re-crossing of the Mara River to seek fresh pasture. To ride amongst them is bliss.

All the wildebeest calve in a three week period in February/March. The Serengeti herds on the flat plains in the south of their range, which is a great spectacle, and the northern herds on the Loita Plains to the north east of the Mara, from which they take their name. The whole range of both migrations is perhaps 150 miles north- south and 60 miles east-west.

Rainfall patterns throughout the year dictate the extent and timing of the wildebeest movements and are as variable as the weather. Therefore nobody can predict with any authority where they will be and when, apart from the above guidelines.

Suffice to say that the Mara with two distinct groups is likely to have thousands of animals in the area at any one time. There may be a preponderance of zebra or wildebeest but numbers are always impressive. Elephant also favour the northern areas for the extra bush and fodder that the higher rainfall brings. In conclusion therefore, there is no better or worse time to come. It may rain or be very dry but at 1700 meters (5500 ft.) the climate is always bearable and wonderful game viewing is almost guaranteed.

Browse 7 Trips in the destination Kenya This is the land which was so loved by Ernest Hemingway and Karen Blixen. How fortunate for us that it remains much as it was in their day. The Masai are still there, herding their cattle, and living as... Read more 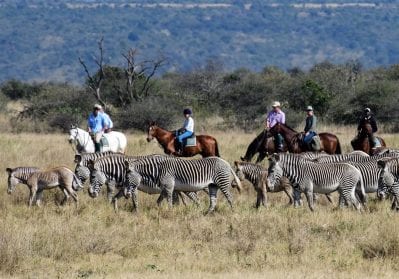 In addition to game drives and walks, Sosian is perfect for horseback riding. The ranch has numerous trails of varying levels of difficulty, and a ready supply of well-trained horses. It is home to 18 horses and going for... Read more A custom Kenya safari with Equitours provided you with something beyond the ordinary; the ability to avoid the mini bus routes and get under the skin of the country. These trips are ideal for families that have some members... Read more The Amboseli Safari passes through classic African big game country beneath snow-capped Mt. Kilimanjaro, which towers a breathtaking 15,000 ft. above the surrounding plains. Amboseli National Park and the nearby areas hold some of Africa’s most abundant wildlife and,... Read more If you are interested in a horseback riding vacation in Kenya, Ol Donyo Lodge offers a unique opportunity to experience the nature and culture that makes Kenya an outstanding travel destination while enjoying an equestrian vacation.  Set within the... Read more This trip along the base of Mt. Kenya presents a unique perspective of Kenya, since most of the ride is on vast private ranches up to 100,000 acres. It affords fascinating insights into the conflicts between wild game and... Read more Deloraine House is set in the middle of the 5,000 acre commercial farm at 6,000 ft. on the lower slopes of Londiani Mountain. It has a forest and bamboo shrouded volcano, on the western edge of the Great Rift... Read more

My time on safari with Equitours in Kenya was unlike anything I had ever experienced and surpassed my wildest expectations. It was truly the most exquisitely planned and wonderful introduction to Africa that I could have hoped for and is something that I will, and must, do again. The Ultimate Riding Experience DAY 1: I arrived for the Masai Mara Ride Safari in Kenya via a 10-passenger plane. The place looked like a movie set. For as far as I could see there was gently rolling, short... Read more For me one of the pleasures of riding in locations around the world is getting to know the horses local to each region. India has the courageous Marwari horses that were bred for war and have endurance, heart, and... Read more Our riding safari in Kenya is certainly the trip of a life time. The horses are magnificent, the rides are exciting, the staff is always willing to help, the camping is luxurious, the terrain is beautiful, but more than... Read more