Choose from 15 trips in Spain

Horseback riding in Spain is an ancient art which contributed enormously to their military success and helped them become the most powerful country in Europe in the 16th century.  It was their magnificent Arab, Andalusian and Barb horses which enabled them to conquer mighty empires in the Americas like those of the Aztecs and the Incas.   Vast wealth from plundering the treasures of America enriched Spain and began a prosperous period when art and architecture flourished for centuries.  Travelers can still wonder at the artistic glories created during this period.  Today riders see picturesque medieval castles and traverse ancient, walled towns.  This is the land which fostered great artists like Picasso, El Greco, Velasquez and Dali.  Being exposed to this enthralling history is one of the charms of riding vacations in Spain.

Equitours has developed over many years a broad choice of excellent and well tested equestrian vacations.  You can ride from the Mediterranean to the rugged mountains of the interior.  You can gallop along beaches in Catalonia, wind through the mountain trails of the remote Alpujarras or take dressage lessons in Andalusia.  Spain is truly a many- faceted land where the horse is still much revered.  From the Epona Equestrian Center you can visit the Royal Spanish Riding School in nearby Jerez where magnificent Andalusian stallions perform the most intricate maneuvers in dressage.  The ambiance created in this place by the exquisite architecture of the building, the costumes of the riders and the apparel of the horses is most impressive.  The precision of riders and the superb performance of the horses are breathtaking.  Of course classical dressage developed from the need to have warhorses perform athletic feats like the capriole where the horse leaps in the air and gives a mighty kick with both legs capable of smashing surrounding foot soldiers with devastating blows far more powerful than any human could give.  In those days they were as effective as modern tanks.

Spain is understandably one of the world’s most popular tourist destinations.  It has a very rich cultural tradition with castles out of fairy tales, flamenco dancers, soulful folk songs, gastronomic delights, excellent climate and good safety for travelers.  On the back of a good horse you can go deep into the country off the normal tourist path and experience the vibrant heart of Spain.  At the same time you will have the opportunity to practice the sport you love on fine horses.

The best time to visit Spain is either in late spring or early autumn – especially if you’re going to Andalucia or the Mediterranean coastal areas. Central Spain is best visited in October or May, and Southern Spain offers mild temperatures year round.

Browse 15 Trips in the destination Spain This horseback riding holiday in Spain passes through the Valleys of Gredos, one of the most distinctive regions of the Iberian Peninsula. River valleys, surrounded by rugged mountains, are dotted with small villages. Here and there a towering castle... Read more Riders will be inspired by the Sierra de Gredos National Park's diverse display of flora and fauna through the Tormes, Corneja and Alberche river valleys.  Ride up slopes of oak, pine and chestnut trees, discover wildlife from rocky overlooks,... Read more Experience for yourself  Catalonia's wild beauty that attracted painters like Dali in the mid 19th century who drew inspiration from the spectacular coastline, the intense green fields and forests, the deep blue Mediterranean Sea and sky, and the reddish... Read more Enjoy opportunities for fast riding and a day on the beach on beautiful Andalusian horses with much time spent in the saddle. You will enjoy comfortable accommodations en-route in natural stone houses and family-run farms and hotels and while... Read more This picturesque riding center provides trail riding in the morning, and afternoon dressage instruction, making for a memorable dressage holiday in Spain. The entire Garcia family is involved in the day to day activities at the center.  Jane and... Read more We are offering the best of dressage riding in Spain with this unique opportunity to increase your knowledge of classical dressage with instruction from a grand master. Week-long clinics culminate in four intensive, individual lessons from Raphael Soto, an... Read more This week-long intensive dressage riding holiday in Spain culminates in a private lesson with Raphael Soto, an Olympic silver medalist in dressage. Soto is not only one of the world’s finest dressage riders, but also a gifted and charismatic... Read more The Alpujarra and Coastal Range rides in the Sierra Nevada mountains use well mannered, fit horses and are moderately paced through beautiful landscape going up to alpine meadows. For these reasons this trip is an ideal horse riding holiday... Read more The Alpujarra and Coastal Range rides in the Sierra Nevada mountains follow ancient bridle paths from village to village on well mannered, fit horses at a moderate pace. The Alpujarra Ride is an ideal horseback riding tour in Spain... Read more Ride in the provinces of Seville and Huelva, a great destination for horseback riding in Andalusia during the winter months. This region is the cradle of the Andalusian horse, a land of deeply rooted traditions, many related to agricultural... Read more The Bandit trail is a diversified horse riding trek through massive canyons, table mountains and volcanoes - a riding paradise where outlaws once hid. The fresh tender green of the deciduous trees in May and the autumnal coloring of... Read more This trail is a great option for mountain lovers who don't want to miss out on tasteful accommodations. Enjoy a dynamic ride from the Mediterranean lowlands to the alpine mountains of the Pyrenees. Lively canters leads into exhilarating climbing... Read more Catalonia is a region of diverse landscapes, mild climate and complex cultural history, and the Catalonia Coast Trail opens the wild side of this region to you. On the three shorter days, you visit the castle of Perelade, a... Read more Ride beautiful Spanish horses along the ancient bridle paths and mountain trails traditionally linking the small whitewashed villages on this short break. Sulayr translated from Spanish means “mountain of the sun” and it is what the Arabs called the... Read more In early April of 2018 I was excited to be heading off to Catalonia, to participate in the Mediterranean Trail, covering about 100 miles in 5 days. After a long Wyoming winter – March and April are tough months... Read more Riding High In the Sierra Nevadas Sitting now in my living room in Verona, Wisconsin, it is hard to believe that a week ago I was sleeping in a rustic inn in Trevelez, the highest village in Spain, following... Read more History of Horseback Riding in Spain; From Alta Mira to the American Plains The arrival date for the first wild horses to reach Spain after their ancestors crossed the Bering Straits from America is lost to us in the... Read more 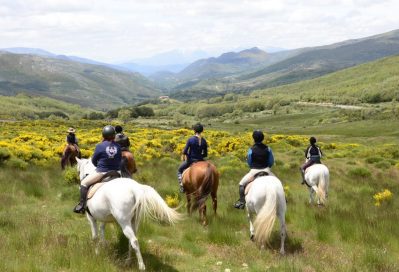 An Exploratory Riding Vacation in Spain One of the greatest perks of being a ride consultant at Equitours is being able to travel, actually experience our rides first hand, meet and develop friendships with our outfitters, and get to... Read more