Vineyards and Beaches of Bordeaux 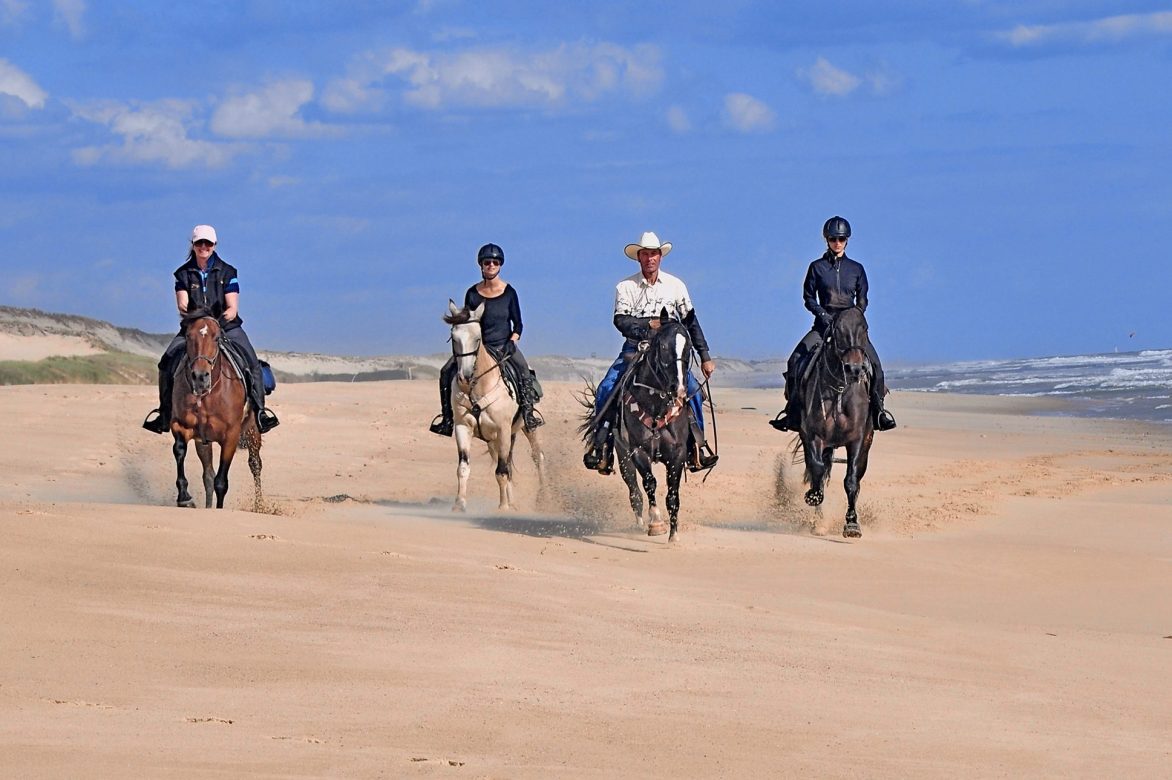 Visit the nearby points of interest by horseback
Previous
Next Enjoy the authentic old world charm of France
Previous
Next Stay in lovely accommodations
Previous
Next

Spend a spectacular week riding on the beach in France and enjoying the offerings of top-notch vineyards. The Gironde region, and its major port – Bordeaux, have a rich and varied cultural heritage, most famously known for its prestigious wine-producing chateaux and some of the world’s best Romanesque and Gothic architecture.

Begin the week riding from the 12th century medieval village of St-Emilion, with an architectural legacy almost without equal, crossing the Gironde estuary by boat, and continuing on through the Médoc vineyards and its most famous chateaux; Margaux, Latour, Pichon-Baron and Lafite Rothschild  among others. Canter through miles of pine forests before ending on the sandy beaches of the Atlantic. Join us for a week of riding, wine tasting and gastronomic meals at three and four star chateaux and hotels.

You will be staying in accommodations ranging from charming traditional hotels of character to three to four star chateaux. All rooms will have en-suite bathrooms, and the first night’s hotel has a swimming pool.

Breakfast will be taken in the hotels where you are staying. The evening meals will be in the restaurant at each night’s accommodations or nearby, and will be a sampling of wonderful French cuisine and wines of Bordeaux. Lunches are usually picnics taken on the outskirts, or in villages, and may consist of pâté, ham, salads, cold meats or seafood, cheeses, fresh breads, wine, beer, soft drinks and fruits.

This is not a recommended option for non-riders.

You will be met at 2:00 pm at the Bordeaux train station or airport and taken to your hotel in St. Emilion for the afternoon/evening. The medieval town of St. Emilion has one of the most important architectural heritages in Europe and it is listed as a world heritage site by UNESCO. Standing proudly on the top of a hill overlooking the Dordogne valley, the village, with its sun baked, Roman tiled roofs, was built in the shape of an amphitheater. You will have the opportunity to visit a very unique monolithic (underground) church from the 11th century, and a monolithic cellar in the village, before enjoying your first wine tasting – a Grand Cru, before dinner at your hotel.

After breakfast, head out to a château where the horses are waiting for you, in the nearby village of Blaye. After a 10 o’clock small wine tasting at the château and allocation of the horses, you will ride heading north along the river to the Citadelle de Blaye, built by Vauban (military engineer to Louis XIV) in 1689 and set with star-shaped bastions. You will enjoy your first picnic lunch within its walls. In the afternoon, you will take the horses on a ferry to cross the Gironde estuary (approx 30 minutes). Arriving at Port Lamarque, you set off to the day’s destination, a charming chateau/hotel in the Médoc. Dinner will be in a fine gastronomic restaurant in the nearby village of Margaux. Riding time: 4 hours (please note all riding times are estimations and subject to change)

Continue through the Médoc region, riding past many of the most prestigious and beautiful chateaux of the area; Chateau Lanessan, Beaucaillou, Pichon-Baron, Latour, and Lafitte Rothschild, to name a few. Stopping at Chateau Lanessan for a picnic lunch on the grounds, you will have the opportunity to taste the chateau’s wine during your meal. After lunch, take moment to visit their horse museum before riding off again to visit the famous Chateau Pichon-Baron (Grand Cru Pauillac). After a visit and wine tasting there, you (and the horses) will be chauffeured to your château/B&B in the Saint Estephe wine appellation, where you will stay for the next two nights. Enjoy dinner at a restaurant in a nearby village. Riding time: 4.5 hours

The ride this morning will take you through the vineyards and along the riverbank, where you can often see local fishermen at work. Arriving at Chateau Loudenne for lunch, you will picnic on the beautiful grounds of this charming, pink manor house built in the 17th century, with its remarkable view of the Gironde estuary. In the afternoon, you will ride back to your château from the night before, passing vineyards, roman archaeological excavations and miles of marshland used primarily as pasture for horses and cattle. Dinner will be at a nearby gastronomic restaurant in the village of Pauillac. Riding time: 5 hours

After breakfast and a bit of time to relax in your room, you will have the chance to visit the modern cellar of the Château where you stayed the last two nights, followed by a tasting of their fine Crus Bourgeois wines. At the end of the morning, you will leave behind the last of the vineyards. You (and horses) will be escorted (approx 50 minutes) to your final destination on the ocean – a 4-star hotel and Spa. After lunch at the hotel, you will ride to the ocean, enjoying some nice canters through the pine forest and on the beach. Back to the hotel, you can relax at the heated pool or at the spa before dinner. (It is possible to arrange a massage with a three week advance booking. Please advise Equitours if you wish to have a booking made). Enjoy the evening’s meal at a beach-side restaurant, where you will have the opportunity to try more of the regions specialties and wines. Riding time: 3 hours

This morning you ride through the sandy pine forests of the region, with many opportunities for long trots and canters. Stop for a last delicious picnic lunch at Le Porge Ocean, before riding on the beach. Your horses can relax their legs in the water, before a long canter along the surf. Return to the charming hotel of the previous evening for your farewell dinner and last night of delicious Bordeaux specialties. Riding time: 6 hours

After breakfast transfer to Bordeaux train station or to Bordeaux airport (approx 1h20), arriving about 11:00 am.

This itinerary is flexible. Changes may occur due to weather or other unforeseen circumstances.

Prices are based on the dollar/euro exchange and are subject to change. Ride price is set, guaranteed, and final at the time deposit is paid.

We had a wonderful time. The horses were so well trained, yet lively and eager to go at any pace, so it was exciting riding yet I felt secure. The food and wine were of exceptionally good quality; and the picnic lunches were amazing! The scenery, hotel accommodations and chateau visits were great and all logistical arrangements were seamless. Ride to some of the most well known chateaux in the Loire valley, on a well designed itinerary to include the history and culture of the area. Well trained... Read more